Polling regarding the most recent Supreme Court decision is almost entirely stupid, because is seeks opinion on the legality of abortion, and the Supreme Court made no decision on that issue whatever. What it decided was simply that it is not a federal issue, is not an issue to be decided by the constitution, and that it must be decided by each state rather than by a federal court.

Each state is perfectly free to rule that abortion is entirely or partially legal within its borders, and many have done so. That includes California, which is experiencing rioting over the supposition that the Supreme Court outlawed abortion. Actually, the Supreme Court's decision had no effect whatever in this state, where abortion remains available to precisely the same degree that it did before the ruling.

The media has not helped. Robert Kuttner, of The American Prospect, said of the ruling that, "the Court’s ruling today does a lot more than criminalize abortion." It did nothing of the sort, of course, let alone "a lot more." The Wall Street Journal referred to the decision as "eliminating a constitutional right to an abortion," which is another fiction. There was never a "constitutional right to an abortion," and this decision merely eliminated the fiction perpetrated by an earlier court.

What the Supreme Court even said in its ruling is that if the people of this nation want a nationwide legal right to abortion, then they can prevail upon their legislators to pass a federal law to that effect. Such a law would not be struck down because, while the constitution does not contain a provision guaranteeing abortion, it does not contain one prohibiting abortion either. The Court said explicitly they would have no problem with such a federal law should Congress decide to pass one.

Will Congress hear what was said and pass a law reflecting public opinion? Not only no but, "Oh, hell no." That would require a level of courage far above that which is possessed by Congress. They want no part of any decision on which the nation is anywhere near to being evenly divided. They punt such decisions to courts, and the executive branch. That's why they leave it to the President on all matters affecting the use of military force. That's why they will not pass a budget until the President proposes one, so that the media will endlessly prate about "the Bush tax cuts," even though Congress passed them. That's why "Obamacare" is called "Obamacare" even though Obama had almost nothing to do with any of the few good parts.

They won't pass an abortion law either; won't even allow the media to let the voters know that such a thing is possible.

Posted by Jayhawk at 7:35 AM No comments: 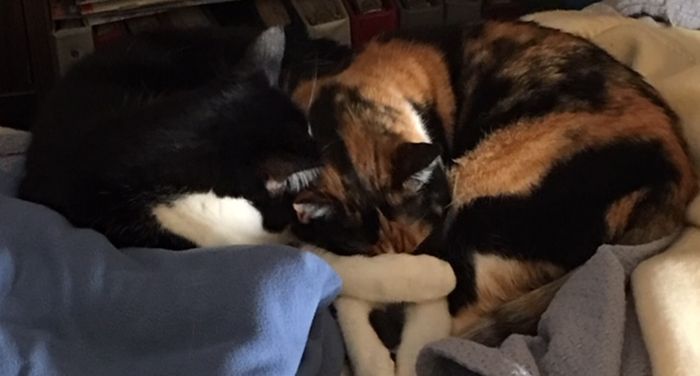 This is Willy protecting his sister, Missy, while their dad is watching a Dutchman in an English car being chased by a Spaniard in an Italian car for more than twenty laps. (Formula 1 does live up to its claim of being international racing.) A certain amount of swearing and yelling seemed like it might be pending.

Carlos Sainz was never more than 1.05 seconds behind Max Verstaffen, and was often as close as 0.025 seconds for the entire 20+ laps, and all it would have taken was for Max to breathe wrong and he would have been passed. The pass never happened, and the swearing and yelling was averted. A small amount of screaming did occur when the Red Bull took the checkered flag, but the cats are used to that.