Yes, the Formula 1 “race” was a farce, but too little notice is given to the Red Bull team rebuilding Sergio’s car and having it ready to race in less than two hours. The guys in the garage are the unsung heroes of auto racing.

Also unnoticed was the action of Kevin Harvick on the final lap at Daytona last night. Caught in the middle of a massive multi-car pileup, his car was pretty much destroyed, but he managed to drive free of all the wreckage and make it all the way down the track and across the finish line.

His wreckage (I won’t call it a car) was visible in the background as Ryan Blaney was celebrating at the finish line. I think his effort, which gained him several positions in the race results, deserved comment, but it escaped NBC’s notice.

Posted by Jayhawk at 8:07 AM No comments:

I was reading a blog yesterday in which the writer mentioned how, as a child, she would have felt unsafe if her parents were not in charge, and it brought back a childhood memory.

I was 7 or 8 years old and had been brought to the hospital with a fairly severe concussion. After making me stay awake for some time, they finally got me admitted and into a room and told me I could go to sleep.

Then I heard my father’s voice out in the hallway and I was asleep before he made it into the room. 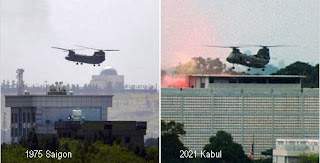 After 46 years we seem to be doing the same thing and, while it's a bit on the trivial side, we're using the same type of helicopter to do it?

Update, Monday, 10:15pm: I was not actually intending to imply criticism. The CH-46 Sea Knight is a fine bird. Like the B-52, which we are also still using in quantity, it was built by Boeing back when that company was run by engineers rather than by bookkeepers.

The human species was well established in North America during the last Ice Age, which means they saw the end of that Ice Age coming.

Were they panicked? Did they see the ice cap melting and scream hysterically at each other about the disaster that would befall them if all that ice continued to melt? Did they frantically try to imagine ways to stop the ice from melting further, because of the unimaginably bad conditions that would result if all the ice melted?

“We have to build fewer camp fires, because we’re all going to die if the ice melts.”

They didn’t stop the ice from melting, of course (if they tried, which is doubtful), and things didn’t get all that bad, they actually got better.

So here we are with the ice melting again, and no one is suggesting that we ought to be coming up with ways to live with the change, they are hysterically screaming that we have to stop the change.

If you see a boulder rolling down the hill at you, which is the better course of action? Step aside, or try to stop the boulder? Well, if you are a “climate scientist,” the obvious answer is “stop the boulder.” Good luck with that.

Humans have one advantage over any other being in the animal kingdom. We can use our intellect to adapt to change. Well, we used to be able to do that.