"They go to war, these young men, not to die for their country but to place themselves, their precious lives, between their home and the forces which would destroy it."
Kenneth Roberts, A Rabble in Arms 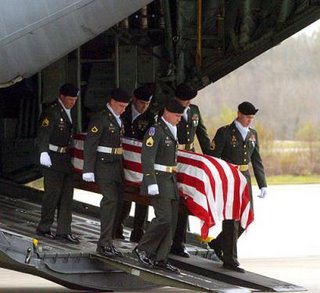 (I took the picture from www.thememoryhole.org without permission, but the context on that site makes it clear they won't mind me using it here. And I may have the quote from A Rabble in Arms a little off, but it's close.)

There is, to my mind, no more noble profession than to wear the uniform of the armed forces of one's country; no more noble endeavor than to go in harms way in defense of that country and its principles. My father served in uniform for 43 years; fought in WW2 and Korea. I served a bit over 4 years until I was mustered out for medical reasons, and forty years later I still to no small degree define myself by that all-too-short tour of service to my country. I have some worthy accomplishments since then, but those were years when what I was doing really mattered.

When those young men and women lose their lives in distant, hostile lands they should be brought home to welcoming crowds, to the sound of a military band playing tunes of glory, and met by the Commander-in-Chief who sent them overseas. We owe them that honor. We owe it to their families as well.

The fallen do not deserve to be brought home in the dark of night so that the government does not look bad and the citizenry does not have to be reminded of the cost of their security. We dishonor our country and we shame ourselves by permitting this outrage.

My father was buried at Arlington. With the band, the troops and the horse-drawn caisson it was a significant ceremony and quite a lot of people stopped to watch. People removed their hats, and those in uniform saluted the flag that was draped over his coffin. Did I feel they were intruding? I did not. I felt comforted that some small part of a grateful nation was there to honor his service and share my loss with me.